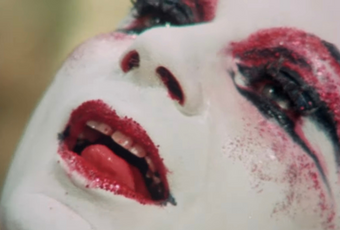 SEBASTIANE (1976): THE HOMOEROTICISM IN CHRISTIANITY

EXILE PROVES TO BE FULL OF NUDE MEN, WHO PLAY AND BATHE WITH ONE ANOTHER, AND WHO ARE ON FULL DISPLAY IN THE FOREGROUND, BACKGROUND, SCENE-TO-SCENE, FLESH-TO-FLESH.

Derek Jarman’s Sebastiane (1976) opens with a text providing historical background: the year is 303, and Diocletian is on a campaign to rid Rome of Christians. The following sequence shows a theatrical rendition of a bukkake scene. A lone dancer, powdered in white, receives a thrust of colorful, wooden phalluses. At the end of the dance, a white substance drowns the focal dancer in a white, suggestive fluid, engaging the Roman audience, who celebrate galore. Diocletian appears, commands the killing of a Christian soldier. Sebastian pleads to Diocletian to spare the soldier, revealing Sebastian’s sympathies to the Christians. Diocletian strips Sebastian of his rank, and exiles him to a desolate desert. Well, not desolate. Exile proves to be full of nude men, who play and bathe with one another, and who are on full display in the foreground, background, scene-to-scene, flesh-to-flesh.
Evidently, from the opening scenes, Jarman’s retelling of St. Sebastian’s martyrdom is gifted with a clear, gay narrative. Although Christian saints rarely make the cut for celebration within LGBTQ+ culture, St. Sebastian does carry the title of gay icon for centuries. Between Botticelli, Mantenga, Carravagio, Perugino, Bellini, Reni, Mewling, de la Tour, and OH so many more, St. Sebastian’s artistic depiction is always punctured, beautiful, and exposed to our gaze. I recommend reading The Independent’s “Arrows of Desire: How Did St. Sebastian Become an Enduring, Homo-Erotic Icon?” to understand how St. Sebastian came to be read as queer, and how we arrive to the beautiful and experimental Sebastiane.
In Sebastiane, oppositional themes such as Christianity and paganism, historicism and anachronisms, pain and pleasure, and abstinence and desire, all co-exist to present a relation to homoeroticism in Christianity, as well as the relation to the martyrization of St. Sebastian as a patron saint of gays.
​Sebastian claims his body and faith is for God alone. Sebastian’s exile occurs because of his contention towards the Roman, pagan gods. The opposition is clear. However, Sebastian’s form of adoration is also in opposition between his claim to Christianity and rejection of paganism. For his God, he dances The Birth of the Sun, compares God to Apollo, and ties God to worldly pleasures, going as far as describing himself intimately with God. After Severus, Sebastian’s commanding officer, shows his sexual desire for Sebastian and Sebastian rejects him, Severus ties Sebastian down to suffer in the heat of the sun. A Christ-like image. Moments later, Justin, Sebastian’s only friend, arrives to help Sebastian. In a stunning, Latin monologue, intercut by scenes of slow-motion intimacy between men, Sebastian praises God:

His hair is like the sun’s rays. His body is golden like molten gold. This hand of His will smooth away these wounds. Justin, He is as beautiful as the sun. This sun which caresses me is like His burning desire. He is Phoebus Apollo. The sun is His burning kiss. His beauty is enhanced by His anger. It is His anger which is divine. His punishments are like Christ’s promises. He takes me in His arm and caresses my bleeding body. I want to be with Him. I love Him.

The intercut scenes to men caressing, kissing, and falling into one another in slow-motion heightens the passion that Sebastian holds for God, despite his pain under the sun. Instead, Sebastian subverts the sun’s heat to God’s kisses. The film makes a large point in displaying the homoerotic language used to worship God, emphasizing the irony of homophobia that exists within Christianity as well as the present analogy for the oppression LGBTQ+ people face within Christian nations.
To be clear, the film accepts homophobia existed in Ancient Rome. In fact, the warden of the camp, Max, calls his fellow-exiles faggots, and speaks low of the other soldiers, even though he still fucks them. Interestingly, Max is dressed in a distinct anachronism: a gold earring worn only in his left ear—a nod to the hanky code that communicates the character’s dominance. The anachronism highlights Max as a foil to Sebastian, since both characters hold a demeanor of dominance surrounding their desires. Max acts out physical dominance over the others, while Sebastian abstains his desires through his distance and rejection of his fellow-exiles. Dominance and desire develop into key themes throughout the film as Severus and Max employ torture onto Sebastian. The scenes in which torture links Sebastian to Christ also work to link the act of torture to BDSM. Perhaps, all of which, constitute how queer-coded Christian figures and stories are read.
​Sebastiane is a must-watch film if you wish to explore a queer film canon, especially since Derek Jarman contributes tons to queer film. Sebastiane is exciting for its slow-motion cinematography that brings out gay intimacy, while providing a subversive criticism to the homophobia resulted from Christianity by revealing the homoeroticism that exists in much of Christian imagery. I don’t know where else you would turn to find a film that elegantly depicts a theatrical rendition of a bukkake scene, horseback riding soldiers in thongs, or a vast, desolate desert that aims to quench the thirst of gay audiences.